The blues of the painter’s palette

In Art, many pigments are used to achieve different shades of blue. In ancient times, the powder of the mineral Lazulite provided a blue pigment highly reputed among the great painters of the Renaissance for its durability. Leonardo da Vinci, Alberto Durero and Fra Angelico referred to lapis lazuli dust as “blue gold.” At that time, its price matched that of gold, depending on the area of ​​the frame occupied with this color, its price varied.

The blue of Egypt, also known as Pompeii blue, is the first synthetic manufacturing pigment known, typical of ancient cultures such as Babylon or Egypt and used until the end of the Western Roman Empire. It is a typical blue tone that can be found in the decorations of ancient Egypt, Mesopotamia and Rome. This variety of was also used to reinforce a polished color. It is a pigment that has resisted without altering the passage of more than 5000 years.

In the palette of a painter we can find today mainly four types of blue: the most common is cerulean blue, cyan blue or cyan. Until the mid-twentieth century, with the development of the graphic industry, cyan blue played a leading role in the graphic and publishing industry. In Plastic Arts, the Cyan color is also called “Celeste”, “Turquoise” and in some cases “Water-marine” alluding to the greenish blue color. The second type is ultramarine blue, a synthetic version of the lazpislazuli that developed from 1800. The third is cobalt mineral blue, a color that replaced lapis lazuli overseas, very light stable but economically more expensive. Finally, another well-known blue color is Prussian blue, of a very deep hue and attractive to the eye, which however is not usually recommended for its cyanide composition, highly toxic to health. The color blue has had much importance in the work some of the most significant artists of the twentieth century. 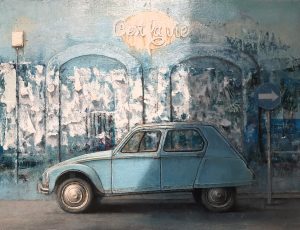 Yves Klein popularized the use of his patented “International Blue Klein” in his work. The artists of the s. XXI continue to use the color blue as a differentiating element of some of his works from the conceptual plane, enduring its symbolic use in the evolutionary line of history. 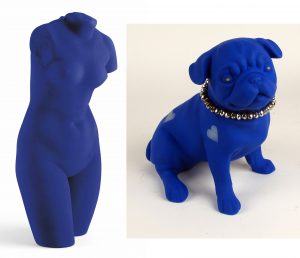 Artists of Kreislerart.com use the color blue as the main argument in some of their most significant works, such as the sculptor Felipao, who makes his particular conceptual nod to the aforementioned Yves Klein through an ironic and contemporary look with his work “Pippa -Blue. ”

Likewise, and from a geometric perspective rooted in the metaphysical pictorial tradition, the artist María Luisa de Mendoza pays her particular tribute to this color with her “Blue Room“. 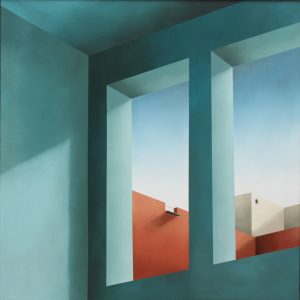