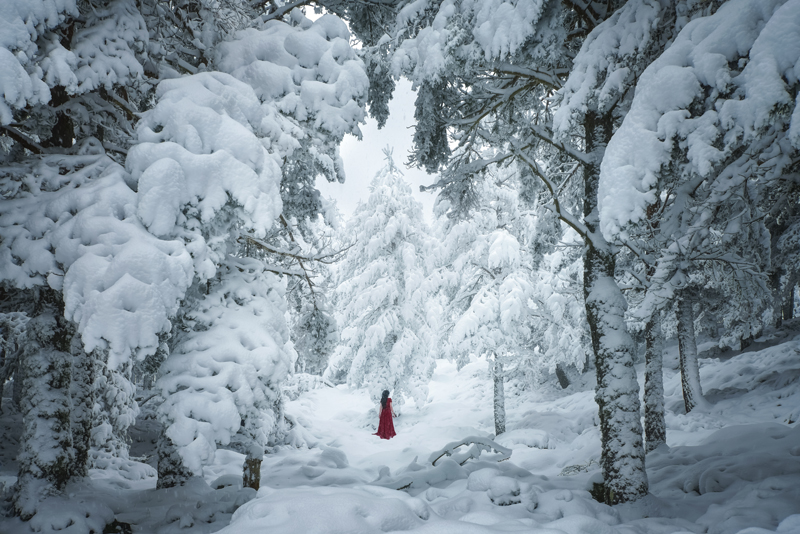 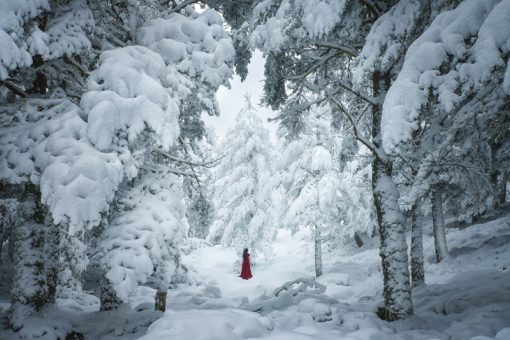 “The landscape rose gently; on the landscape, suspended in the air, my spirit floated, free of ties, born again” Novalis, Hymns to the night
“Arcadia”
Arcadia is an imaginary place, created and described by numerous poets and artists. It refers to a utopian territory in which man lives in communion with nature. A natural and paradisiacal way of life, not corrupted by civilization.
It is a photographic work that aims to create a harmonious unity between man and the surrounding landscape. It is a reflection on the supremacy of the natural order over the human will, the dialogue of the individual with the incommensurability of the whole. They are intimate spaces of solitude and silence in which the feelings of the character that appears in the photograph are projected. The resulting image is the reflection of the character’s soul. Small, lost, abducted figures in the contemplation of excess. By appearing on their backs or not recognizing themselves, they become archetypes with which the viewer can feel identified
A release from the most immediate reality, a flight in space and time. A search for serenity, isolation … A moment of suspension between becoming and fading. The representation of open and limitless spaces, in which the man represented in his real insignificance appears, is the source of inspiration for the images in this photographic series.
It is a project in which nature is the key element, occupying a central role, without any sign of human intervention in it. The true protagonist is the landscape, infinite and eternal in the face of human finitude. Dramatic scenes are shown in its powerful immensity, in which the presence of man is nothing more than the confirmation of his own insignificance. The true protagonists are the sky, the sea, the clouds, the trees and, above all, loneliness. A loneliness understood as an internal and essential quality of people, thus losing its negative character.
The photographs are not intended to simply show a beautiful nature directed towards the decorative or conventionally pleasant, but to produce calm and seclusion. A feeling of time spent, of voluntary exile. An escape from current stress and maelstrom to plunge the viewer into a state of calm and reflection.

Performance cookies are used to understand and analyze the key performance indexes of the website which helps in delivering a better user experience for the visitors.

Analytical cookies are used to understand how visitors interact with the website. These cookies help provide information on metrics the number of visitors, bounce rate, traffic source, etc.

Advertisement cookies are used to provide visitors with relevant ads and marketing campaigns. These cookies track visitors across websites and collect information to provide customized ads.

Other uncategorized cookies are those that are being analyzed and have not been classified into a category as yet.

Save & Accept
Powered by